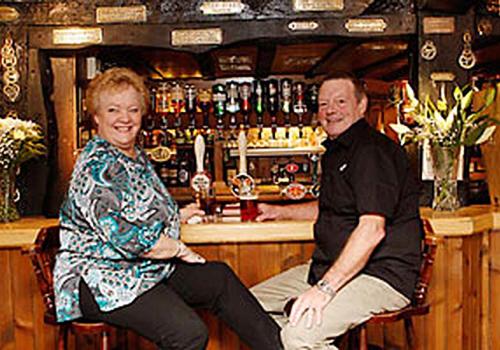 The George has been close to the lives of the Selfe family since 1945.

Alan, who lived in the village began coming to The George at the age of 18. In the summer of 1979 Jane Selfe, his wife, began working as the barmaid. During 1997 they decided to take-up ownership.

Mark Selfe, their son, at 19 years of age became Bar Manager alongside Alan. Jane’s interests were in the Kitchen, accompanied by family Ronnie and Alison.

Our Head Chef Mel, began working here in 1998: Producing our famous homemade pies and creating a vast variety of specials.

In recent years the Selfe family have successfully extended the kitchen twice, increased the size of the restaurant by adding a large conservatory, and created new toilets whilst retaining the quaintness of the 16th century inn.

Creating an ambience for families. The Selfe family built a playground area for children, including bouncy castles in the summer.

We Source out all the finest local products, Including a local Vegetable and Salad Supplier, and personally Handpick our Meat and Fish from Smithfield Market and Billingsgate.

The Selfe Family hope you enjoy your time at The George.

Please enter your requested reservation time,
we will then contact you for confirmation.

Copyright © 2016 The George at Trottiscliffe.